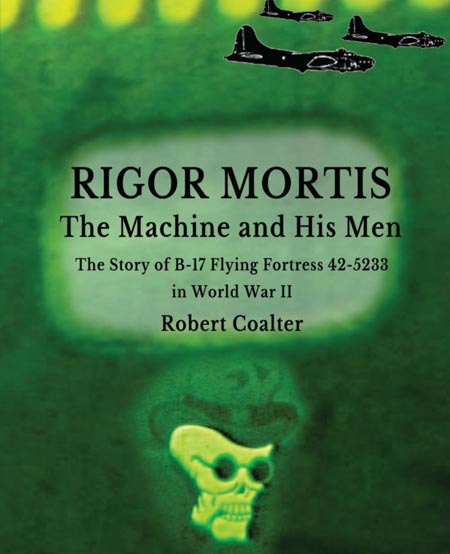 Rigor Mortis. The Machine and His Men

We entered the flak box, that area in the sky near a target where the German anti-aircraft guns concentrated their deadly curtain of steel. All the men could do was to hunker down in their flak suits and wait it out. We had to take it, we could not shoot back. Those guns were not our objective.

The explosions would appear as white or black puffs that began to darken the sky around us. The heat and concussions rocked us but we flew on. Pieces of shrapnel banged and perforated my skin like hail on a tin roof. Planes flew right into a gauntlet of steel death causing more fires and explosions...."

Most aircraft of World War II had pictures of sexy girls, tributes to sweethearts, songs and home. The planes were fondly referred to in a feminine manor. That was not the case with this B-17 tail number 42-25233. He was Rigor Mortis. This is a true story.

This is the story of Rigor Mortis and his men who flew over 120 missions from North Africa and Italy in 1943 and 1944. This sixteen month story encompasses the 301st, 2nd and 483rd Bombardment Groups of the 12th and 15th Air Forces. It begins with the first crew in Salina, Kansas. Their overseas trip via Brazil, arriving at Biskra, Algeria on New Year's Eve 1942. 25233 and his men flew their first mission on January 2. Some missions would be milk runs, many quite difficult. They all had a cost. 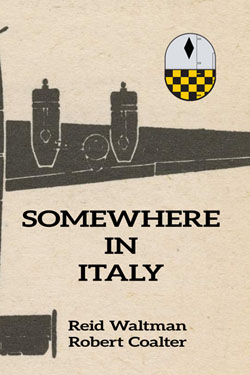 "I flew a number of bombing missions in World War II including a mission into Austria where after rendezvousing with other groups, we proceeded over North Italy toward the Brenner Pass separating Italy from Austria. This route differed to our typical forming up and proceeding north over the Adriatic Sea that enabled us to avoid most of the flak batteries on land. We had been briefed that the Brenner Pass in the Italian Alps at an altitude of 4511 feet was very dangerous, as the Germans had placed numerous flak batteries at this high altitude where these guns could reach our high flying B-24's. As we approached close to the Brenner Pass, all the navigators and pilots had been briefed that the group formation would make a course change to the North - East to avoid the Brenner Pass. As we made the group formation change, I noticed the 757th Bomb Squadron consisting of seven (7) planes was continuing north and we were saying why don't they change course, as the sky was clear of clouds at our altitude. Suddenly, there was a series of flak burst in the 757th squadron and to our horror, we saw four (4) of the seven planes get hit and fall from the sky. We did not know if any of the crews were able to parachute out and still don't know if any survived. The rest of the mission was spent wondering why the 757th had not changed course with the rest of the 459th group. As we proceeded on, the mission was uneventful versus the usual scared to death over the target and worrying about German fighters, flak and engine failures."

Read about these experiences and more in "Somewhere in Italy" by Reid Waltman & Robert Coalter.

A story of B-24 Liberators and the young men who flew them. 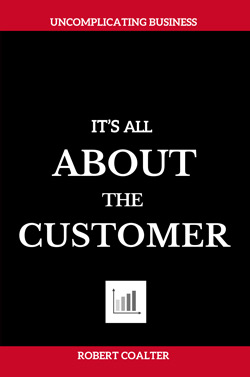 It's All About The Customer

When you strip it all down, your business rises and falls on your interaction with your customer. Are you tired of all these sophisticated programs and their disappointing results? Maybe you need to solidify your foundation and get back to some basics. If so, maybe this book can help you get started.

Professional athletes reach the pinnacle of their sport because they practice the fundamentals. They execute them better than anybody else. Those that master the fundamentals receive the best contract.

Businesses with great execution of the fundamentals produce results. It starts with your customer and maybe how you look at yourself.